This is a piece I had the opportunity to make specifically for the recently founded Dragonfly Home Human Trafficking Relief and Restoration Center in Oklahoma City. This organization’s goal is to serve those impacted by human trafficking and to work towards a future of freedom for survivors of trafficking. I met one of their founding members, Whitney Anderson, through a project I did in 2016 on the OU campus for which I wrote a short autobiographical graphic novel called “So Close, So Far” which you can read here.

This piece is titled “Lady of the House” in reference to its place in the Dragonfly Home. In the image the spoken of lady exhibits some kind of authority over nature, demonstrated through the way the dragonflies seem to celebrate her. She stands alone in a field with the stars while looking away from the viewer to preserve her privacy and display her dignity. The work uses femininity as one of its subjects. Femaleness is complicated and elusive, Biblically the figure of Eve comes to mind. Eve was the mother of all living humans and a beautiful presentation of God’s own image. But Eve also carries the shame of eating the forbidden fruit. Humanity itself, and femininity in its own particular way, carries shame and dignity in the same body. This is a duality I know well, my shame is present in my conspicuous flaws, but because of God who graciously remembers that I was made in his image and through great mercy forgives my flaws, I carry also dignity in my humanity and my womanhood.

Women who are caught up in prostitution through human trafficking are more often associated with shame than dignity, but these women reflect the image of God just as much as I do. These women are so often sexually abused at a very young age, their innocence stolen by people who brutally violated their boundaries. Instead of knowing the value that Christ assigns them, they often blame themselves for the abuse and instead find guilt and shame. The unchecked impact of this abuse or neglect reverberates throughout their lives. Traffickers, masters of spotting vulnerability, target this past abuse and exploit it- tricking them and forcing them into forced or pimp-controlled ‘prostitution’, trapping them in fear, desperation, and hopelessness. In the light of their stories of abuse and entrapment, the position they find themselves in is one that should call those of us with more fortunate pasts, to compassion. We can begin to help by developing an acute awareness of the dignity that is still preserved in them through even the worst parts of their story, the same dignity that is in me, as it was in Eve.

Below are some process images. I was a challenged a good bit by the size of this piece. My approach was to cut out major layers of the image and color them with paint. The paint was acrylic but I used it like watercolor. My love of paper had some room to shine here, especially in the paper moon which had little delicate flowers pressed into it, and the wings of the dragonflies which are made of wonderful, gentle translucent paper. 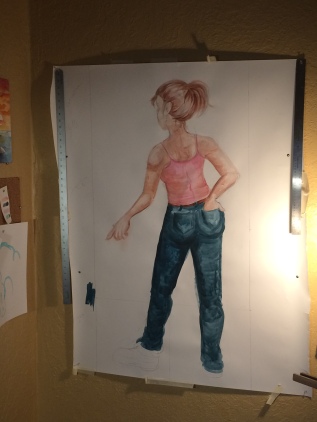 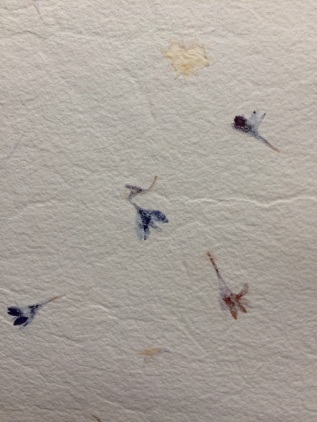 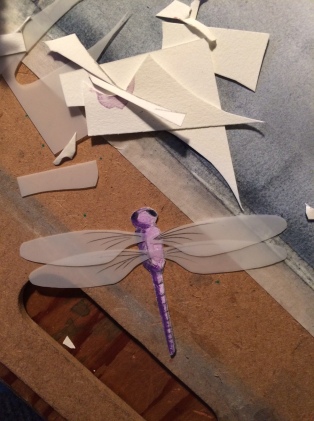 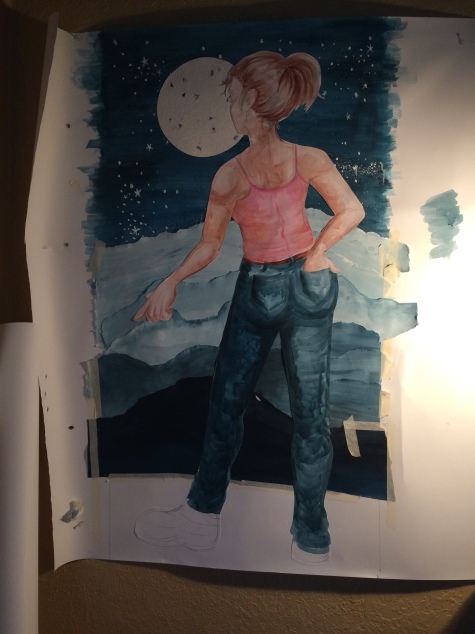 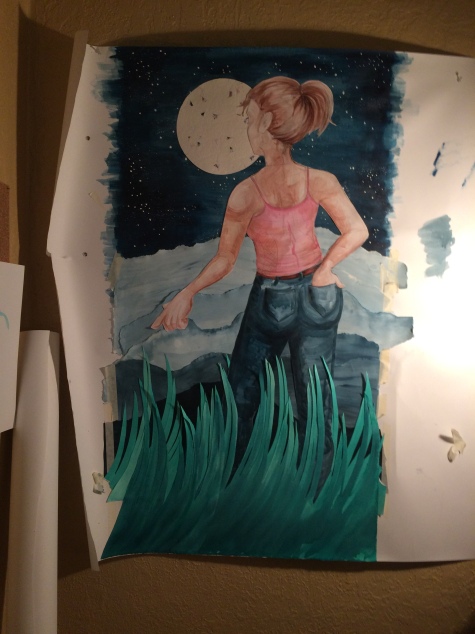